How broadcasters are revolutionising in-stadia ads

Ross Hair, managing director of Supponor explains how brands can target specific live audiences with clever use of tech 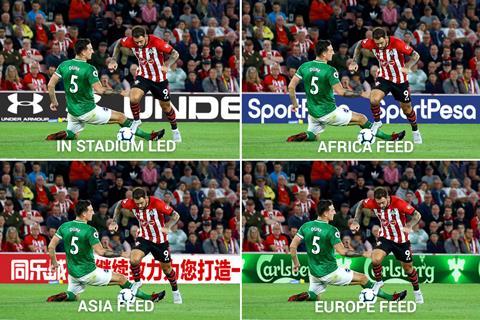 LED perimeter systems have traditionally been installed to allow brands, sponsors and advertisers to create valuable associations with sports, clubs and leagues to promote their products and services to highly engaged audiences.

This began as local, in-stadium messages from local businesses to local people. However, increased global demand for live broadcast sports has vastly increased the attraction of TV-visible signage alongside the field of play as a platform for global brand reach.

Top-tier sports remain one of the few remaining live broadcast phenomena, making it hugely valuable for any brand looking to reach a large audience of passionate fans in real-time.

While this has generated millions of dollars for rights owners, it has sometimes reduced the relevance of the messaging, both to fans in the stadium and regional TV viewers. Until recently, in-stadia messages have necessarily been fairly generic in trying to appeal to a globally sold sponsorship. This is a potential negative for both the rights owner and brand promoter.

Instead, ‘virtual replacement technology’ is on the rise. Developed by companies such as Supponor, virtual overlays of existing advertising can be seamlessly integrated into the broadcast environment, carrying activation messages specific to the region and fans viewing them.

Global sponsors can change product references, or alter the language used, when being viewed in Asia as opposed to the USA.

They can reach a global TV audience but drill down to highly specific messages for individual regions or demographics. The same inventory can be sold to multiple regional sponsors to address their specific markets of interest.

And local regulatory compliance can be assured when advertising alcohol or gambling without affecting other regional regulatory rules.

Virtual replacement technology is not only about TV but can be integrated into OTT or video streaming platforms, such as new sports broadcast DAZN, Eleven Sports and Tencent

OTT provides a direct connection to a viewer, with data allowing increasing awareness and insight. This data provides the fuel to allow virtual, hyper-targeted messages directly onto the perimeter advertising boards of the games being watched online.

Using virtual replacement technology, an interactive message can be differentiated by viewer and delivered direct to their device, with clickable ‘calls to action’.

Equally, virtual replacement technology is not only about advertising. The same tools can also be used to overlay traditional in-stadium physical areas with more dynamic and varied content, such as live social media feeds or statistics from the game. Contextually relevant information can be brought directly to the fan, without taking them away from the action.

Virtual advertising also allows the in-stadium digital displays to be used for more event-based in-stadium fan engagement. If LED perimeter boards no longer have to showcase global brands 100% of the time, they can instead be used to allow fans to send social media messages of support, for game stats to be displayed in-stadium or for local services to be promoted specifically to those in the stadium.

Virtual replacement technology is picking up momentum, with many European football leagues and US sports federations including the NBA, NFL and NHL actively deploying virtual solutions. In Germany’s Bundesliga, it is used for all of Borussia Dortmund’s home games and many of its away games.

In Spain, La Liga deploys the technology for the away games of Real Madrid, Barcelona and Atletico Madrid.

The FA and ITV have begun to use it for England internationals, while many Premier League and Championship clubs are investing in virtual-enabled systems ready for future exploitation.